Hmm...Alliteration gets risky when you start with a K...

As I mentioned in the last few blogs I've posted, my love affair with the Wii is going stronger than ever.  Today I'll regale you with tales of my new-found love: Kirby's Epic Yarn.

This is another Wii title that I wanted to play from when I first heard of it, but it's taken me this long to actually get around to buying and playing it.  Quite frankly, I have been missing out.

My very first impression of this game was that if Paper Mario and Little Sack Boy (as a girl, obviously) could have a baby, this game would be it.  The graphics are on par with LittleBigPlanet, meaning that everything is very textural.  All of the environments look like they are stitched together out of a variety of cloth.  Kirby & Prince Fluff, along with all of your enemies in the game, are all created out of pieces of yarn, and move over the backgrounds in a way very similar to Paper Mario.  They're basically 3D looking, and interact in the background in very simple 3D ways, but have a 2D appeal.

The game is a right to left platformer, with hidden elements above and below the straight path from beginning to end.  In each level you collect beads which act as the game's currency.  There are also three hidden items, two stickers for decorating apartments for game characters, and one music CD which apparently changes the song on the level after you find it.  At the end of the level you are awarded a medal based on how many beads you collected, and you can go back and replay the levels as you want to find all of the hidden items and collect enough beads for the gold medal. 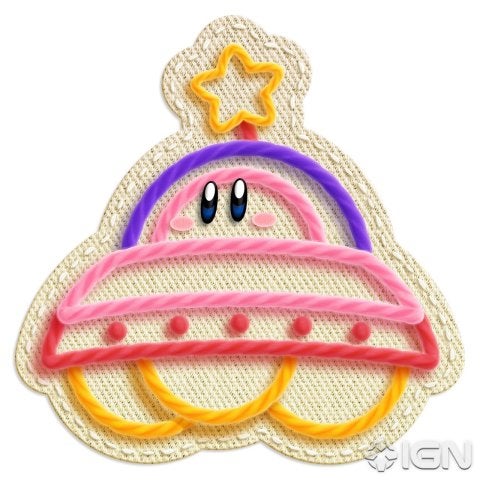 The apartments you decorate increase the type of gameplay options, by opening up characters which want to play mini-games with you in levels you've beaten.  For example, one character wants you to get through a level and collect X amount of beads in X amount of time.  Another wants you to find him and 4 of his friends hidden throughout the level in X amount of time.  They are fun, quick games that add a lot of variety to the typical platformer game play.  Gameplay is also shaken up in levels when Kirby and Prince Fluff become some kind of vehicle to complete a level.  I've played as a UFO, a train, a car, a giant yarn-bomb shooting tank... Every single one has been fun and creative.

Overall I have to say I really like this game.  It's a blast to play, and it's visually interesting.  If you've been a fan of Kirby in the past, or if you just like platformers, or if you just like things that will make you say, "Seriously how cute is this game?" then Kirby's Epic Yarn is for you.  And don't worry, it's not too cute for you manly men out there.

This is the type of side-scroller I can get behind. I've never been super huge on platformers, so I totally rely on games like this to be the point at which I stick my toes in the water.

I'm glad you liked it as much as I do!

eToro is the ultimate forex trading platform for new and advanced traders.