I have never had a problem watching my friends play a single player game.  I have spent many a happy hour watching the Hub wander the wasteland of Fallout 3.  In high school I vicariously played Final Fantasy 7 and Socom through my group of friends.  I have now moved on to watching hour upon hour of my children playing Kirby or Mario, and most recently, Skyrim.  For real. 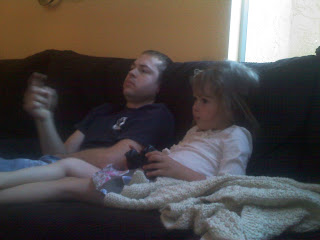 My husband has been teaching the 4-yr-old the basics on Skyrim.  It is so fun to watch them play together and bond over the game.  The kidlet seems to have a natural talent for gaming.  She struggled briefly with controlling both joysticks at once - for movement and camera - but now she's got it down pat.  There's nothing she loves more than wandering around in the forest, searching for the friendly animals and swimming in the streams.  She has had moments of panic and throwing the controller back at dad when there's a vicious bear or group of bandits attacking, but who can blame her?  Having dad there is like a gaming spotter - he's ready to take over in the event that it gets too difficult.

That being said, my watching habits have been strained to the max trying to watch the hub play Skyrim on his own.  Why?  Surprisingly it's not because it makes me nauseous like Oblivion always did... rather it's because we have such radically different play styles that it drives me bananas to watch him play!  He is a hoarder of goods, and even when he desperately needs money he won't sell off his things.  I am the opposite - if I have it and am not immediately using it, I sell it for cold hard cash.  Sometimes to my detriment, but hey, at least I can buy myself a house!  To sit empty.  Because I sold everything..

Are you a watcher, or are you the one that has to be in control?
Posted by Linz at 12:55 PM