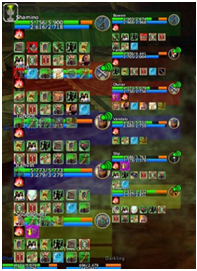 The Rifts also introduce you to another of the games quality of life improvements – Open Raid groups. Whenever you come near a Rift or Invaders, a button pops up on the top of the screen prompting you to join an open group to tackle the invaders. Auto forming groups such as this take away the annoyance of trying to get an invite to a group, particularly when the fight is going strong and people are perhaps too busy to manually invite. The open group format is also quite nice for quests with very specific kill objectives – all you have to do is click on a player’s name, select join party, and you are in a party with no confirmation steps needed. For those of you who want to play with a specific group of people, there is the ability to turn your group private, but I implore you to keep your group open as much as possible – it’s much less of a headache for solo players. The benefits of Open Raid groups are really shown during the Zone Invasion events (periodically the enemy will do a focused invasion attempt where everyone in the zone needs to band together to turn the enemy back) where you can join groups with those nearby in order to be the most effective.
The photo to the left is the party bars in Rift, showing the absolute mess of buffs and debuffs (the icons) on the characters in the party, in some cases obscuring health bars of the character shown below it.  Most of this information is largely irrelevant, and could do with some filtering to show anything that is actually an important piece of information to know.  Digesting this in the middle of the action takes a lot more work than it should have to

The other main thing that sets the game apart for me is their class set up. From a clearly superficial standpoint, 4 classes seem very limited. However, upon closer inspection, there is a great deal of customization within each class to give an incredible amount of variety. Within each class there are 9 ‘souls’ (8 Player vs Event based, and 1 Player vs Player based), which to those WoW players out there are analogous to each branch of a talent tree, and you pick any three of these to combine to make your character. There are obviously so-called ‘cookie cutter’ specializations involved, souls that are ‘meant’ to be paired with other souls, but you can combine them in many unique ways to create a playstyle all your own. Also available for purchase as soon as you can enter the main city are additional specialization templates so you can save up to 5 roles that are available for use anytime (able to be swapped to whenever you are out of combat), though beyond 3 can be very cost prohibitive for a low level player. This ability to mix and match souls is very appealing, and it’s a great deal of fun to see how you can combine the souls to do different things.
Posted by Achievos at 12:01 PM

All those soul options stress me out. I could hardly ever handle the talent tree in WoW.