The Queen of My Castle

I totally got hooked by a link the Frag Dolls posted on their Facebook feed about getting into a closed beta for a new game called Castle Empire.  I'm in it, and I have to say, I am loving it.

The game plays a lot like a simple, slower version of Age of Empires (AoE).  AoE was one of my original loves of gaming, and took many an hour/day/week of my time when I was in high school/college/post-college/right now.  The above screenshot is the main hub of my town.  The island you are on is split into 9 sections, and you start in the bottom left, each remaining section shrouded in fog and filled with bandit camps.  As you defeat them you can take over the sections and increase the size of your town. 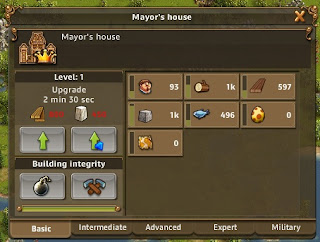 As with AoE, in Castle Empire you must farm for materials like wood, stone, water, fish...  The type of supplies you need are organized by category based on level.  For example, I am currently level 19 and am up to the third category of supplies, advanced, and now have to farm not only fir logs, but also hardwood logs for building and upgrading different buildings in my town.  The system works, but it has been a trial trying to find that perfect balance for collecting goods.  Each building has a time frame that it takes to collect X number of resources, for example, a level 1 fir wood cutter takes 2 minutes and 22 seconds to farm 1 fir log.  A fir wood sawmill, which turns those logs into plants, takes 4 minutes and 28 seconds.  So you have a surplus of wood from plank creation - a good thing because you're going to be using those logs all over the place.  There is a fine balance to be found for supply and demand, and I have seen people in the chat talking about running spreadsheets just to keep it all straight.  I have far from perfected it, but that's part of the fun in my book.

The battle function when taking on bandit camps is simple, but has its own frustrations.  Soldiers are expensive and time consuming, and generally most get killed in battle so you're back to square one on building up your army to take on the next bandit camp.  The enemy camps are clearly marked as easy/medium/hard, and tell you the number of bad guys you're going up against, so you can prepare appropriately.

Obviously this game is in beta.  There have been glitches that I've heard other people talk about in chat, but have not experienced myself.  There are often people in chat that work for development that are getting the players ideas and suggestions, and I think it's a good method.  It's interesting to see how much other online games are influencing people's desires in Castle Empire - I've made suggestions based on AoE and Sim City, and have heard suggestions clearly taken from games as different as WoW.

Right now Castle Empire is a really fun way to kill some time.  It is an interesting combination of a real-time strategy + Facebook game.  I say that mostly because of the time involved.  You aren't going to sit down and play this game through in a couple hours.  Collecting supplies and spending them on buildings and creating your army takes days sometimes.  You also have a friends list and you can help your friends out by gifting supplies or placing buffs on their buildings which make them work twice as hard for X amount of time.  It's a blast, and I love checking in on my little town a few times a day.  So far it seems like a game that can eat up as much of your time as you're willing to let it.  If you want to give it a go, send me a message at achievos@gmail.com and I'll send you an invite.  As of right now I think that's the only way you can get into the beta.

I love me some Age of Empires. Love love love. But I know they are coming out with an AoE MMO sometime and I want to save my MMO virginity for that. But I think I would love that they slowed things down. It seems like it would give you more time to do things without being overwhelmed.