Debbie keeps bringing up the goodness that comes from taking a break from gaming...I think she has a summer bug or something.  don't get me wrong, I love to get outside just as much as the next guy....but I seriously miss gaming!  And nothing else quite scratches that itch, you know?

I don't have games on my cell phone so I have been heavily depending on the DS.  I have always loved the gameboy.  It was my first system (remember the first one that looked like a brick with a green screen? ahh memories...)  From my time spent on the DS I have two short reviews for you.

I love crossword puzzles.  It's my favorite thing in the newspaper.  So for Christmas a couple years ago I asked for this game thinking of the pure, unadulterated joy I would find in having a whole bunch of crosswords right at my fingertips.  Boy oh boy was I wrong.

This game is beyond obnoxiously hard.  Now, I don't think I'm a lost member of Mensa or anything, but I'm not stupid either, and I can only get maaaaybe 1/3 of one of these done.  With goodness knows how many errors.  On this monstrous road trip I even tried to do one with the assistance of my smart friend Katie and even together we were stuck.  this game is just straight up impossible.

And the worst part is that the Nintendo CrossworDS game is, according to Gamestop employees, boringly easy!  No middle ground for us??  I just want something fun to kill time and use my mind for a while.. Guess I'll stick with Sudoku on Brain Age.

I just, and I mean just, started this game.  I think I have like 3 stars in the first bomb world.  And my first impression is that this game is super fun!

It starts out, looks, and plays exactly like Mario 64 for the Nintendo 64.  Only you're Yoshi which, actually, is kind of an improvement.  Yoshi is just so cute.  And if you put on Mario's hat you become Mario so that's pretty fun.  I haven't run into the other characters yet.  I'll get there.  I never actually had Mario 64 when I was growing up so I'm kind of excited to spend some time playing it.

The only issue that I've found thus far is this: remember every difficulty that you had playing Mario 64?  The pain in the butt controls?  The difficulty with the camera angle?  Oh yeah - times that by ONE THOUSAND.  The DS without a joystick, is difficult to handle in the open 3D style world.  But I am hoping it's something I get used to as I play more and more, and this game has definitely shown itself to be plenty fun enough to spend some time with.


And one final, tiny note, on a video game that you have to travel to play: Toy Story Mania!  My husband just took me and our girls to Disneyland this weekend and we waited in line for like an hour to get into this new ride, not really knowing what it even was other than Hey!  There's a line! Let's stand in it! 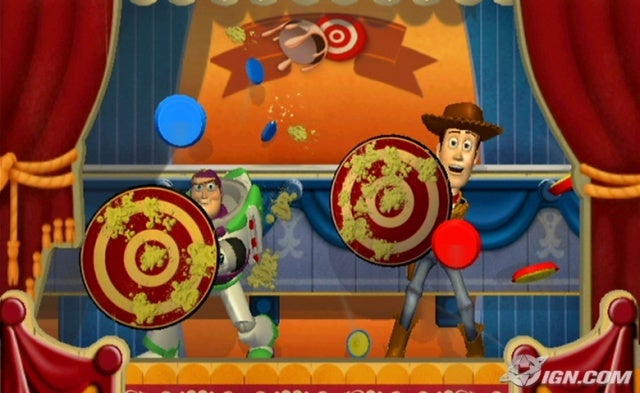 You have to put on these silly glasses because it's all supposed to be in 3D (which I couldn't see as 3D but it looked great to me anyways).  And then you ride in this little car which spins you all over the place and has a gun attached that you shoot at all these video targets.  I don't know if I have expressed my true and deep love for shooting at target games before, but I absolutely adore them.  And that is all this is.  It is awesome.  Plus you're getting whipped around in circles and going all over the place, and it all looks very Toy Story-esque.  It is so much fun.  So if you have an extra pile of money laying around that you don't know what to do with, I would definitely suggest flying to Anaheim, buying a ticket to Disney's California Adventure Park, waiting in line, and riding this awesome ride.  It is like being inside a video game.  Two thumbs WAY up.
Posted by Linz at 7:01 PM

yes. i loved this. so much insight crammed into one blog. you pretty lady, are chalk full of win. I can only guess that hanging with Buzz and Woody in real life would make you want the game even more !