Lego Marvel Super Heroes is so flipping fun you guys.  I literally can not stop playing it.  It's one of those games that you start playing, and then you think, "Wow, I should really get to bed."  Then 2 hours later you're still playing because you need to unlock Ms. Marvel oo and Ghost Rider ooo and Red Hulk oo and....  it just never ends. 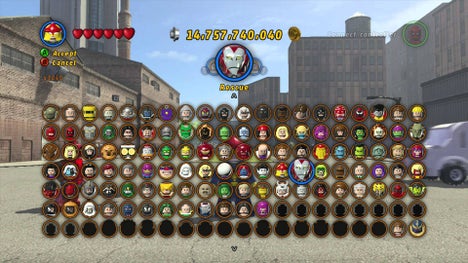 That's the best part.  The story is fun to play, and has all of the elements you expect from a Lego game.  It's silly and funny, and overall fairly easy.  I have to say that some of the puzzles in this Lego iteration truly did leave me puzzled.  I actually had to Google a level because I could not figure out how to progress after I had run around, looked and destroyed everything.  That is the one thing I trip up on in this game - I don't know all of the characters so I'm not sure what all of their special skills are.  It doesn't make it less fun, but it does mean I spend some extra time trying and failing.

I have to say that the games have become more and more polished as they've gone along too.  In the early games (Star Wars, Harry Potter 1...) you could free play, but you only had access to a few of your characters.  Now, even when you free play the levels, you have access to everyone you've unlocked.  And you can save and quit at any time.  Amazing!  I think the characters are more dynamic in Marvel too.  They all have interesting and different animations which makes it fun to branch out from your initial favorites.

Probably the most fun development is the free world map.  The game is based in New York City, and in between levels you can free play the city.  There are about 150 mini side quests to unlock characters and gold bricks.  You can run, fly, drive, and explore the city from the subways to the rooftops.  It's basically an adorable version of GTA IV.  I love it.  I do not love the racing quests, because I am horrible at driving and I think that they flying characters are hard to control... so that gets really frustrating really fast.  But what's life without a few challenges?

So if you like Marvel, Lego, or just plain having fun this is the game for you.  I highly recommend it.
Posted by Linz at 2:57 PM