So we have friends in the industry.  That's right, we're practically famous.  (Note: industry = GameStop.)  And when you have highfalutin friends like this, you're privileged to some pretty awesome knowledge: like how stupid the general public can really be.  In this instance, it's the names people will come up with as misheard or misunderstood actual game titles.  And we got such a kick out of this that I created graphics, and will now review these fictional (for now) games for you.  For free. 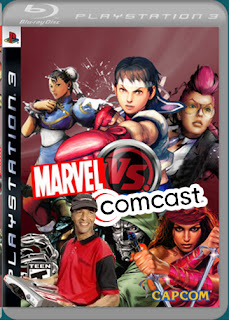 Comcast, as a rule, has too much power.  So the Marvel cast has decided to knock them down a peg or two.  Sit for a moment and let all the awesome images come to mind: Spiderman pummeling HD cable boxes that won't come in better than 1080i.  The X-Men delivering a whooping when you had to pay extra for that DVR (ironically so you wouldn't miss any X-men cartoons.)  The Thing from The Fantastic Four totally dominating those horrible Comcast vans that not only drive horribly, but always park in the most annoying places in your neighborhood.  All this, and more, is now possible in Marvel vs. Comcast. 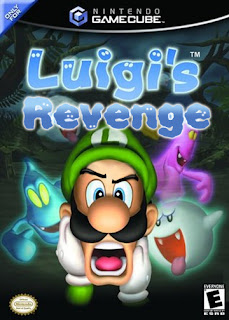 Poor Luigi...He's been living his entire life in the (quite ample) shadow of his rotund brother, Mario.  And he's had enough of it.  In Luigi's Revenge you take the reins as the greener brother, and dominate all those that have stood in his way in the last 27 years.  He'll start small - koopas, goombas, all your typical baddies.. Move up to your basic mid-level boss: Bowser.  Luigi will remove that overgrown turtle's shell for all those kidnappings over the years.  Luigi isn't some second rate princess you know, and he didn't appreciate being taken all those times when Peach was unavailable.  And why hasn't he gotten any of that cake!?  Which leads us to the end battle: Mario.  The ultimate sibling rivalry meted out by pipe wrench.  You won't want to miss this one.
Posted by Linz at 11:31 PM

Email ThisBlogThis!Share to TwitterShare to FacebookShare to Pinterest
Labels: misheard

I had a guy who called every day asking if we had "Deceptions," he of course meant "Mortal Kombat: Deception." Also, everyone calls Heavy Rain Hard Rain.

Lindsey. These are amazing mock ups. You should probably work for a video games compant. And I would like to play Marvel vs Comcast. Those bastards need to be knocked down a peg or two fo sho !!!

Fantastic job! I love the artwork and backstory. If I could play these games I would in a heartbeat!

Dalhsim could be the final villain as he represents Comcasts overseas customer service department.