And another old review. Enjoy.

I'm about 10 1/2 hours into this game...My assumption is that I'm at least halfway, if not almost done. I'm thinking that it's a 15-20 hour game..that is if I can figure out the puzzles. More on that in a moment.


Story: 7/10
The story leaves something to be desired. I'm really pushing it even giving it a 7, probably. The premise is that you are a robot (pretty much the cutest little robot that was ever created, FYI) and you have been purchased by this family to make them happy. But the problem is that they are really broke, the dad bought you without permission, and you were very expensive. So the family is in trouble. The mom is seriously doing some hating. Spoiler: she threatens divorce! (I'm yet to see how this pans out, but based on your goal in the game, if they divorce it's so so stupid. You're job is to make them happy for heaven's sake!)

Graphics: 9/10
Granted this is a Gamecube game, so I know most people don't appreciate the simple cuteness of the graphics, but since I do, Chibi gets 9 out of 10. There isn't a lot of graphic tearing, which is always nice in a game where you control your own camera. Also there's just a lot going on with the chores coming and going (dirty footprints fading as you wash them, reappearing a day later, etc).

Sound: 7/10
I originally gave it a 6/10, but upped it because the soundtrack really is soothing...it's just really repetitive. It's the same music, the same noises, over..and over.. And the problem with it is that sometimes you're playing along and the music just stops! So for the rest of the game-day, you are in silence except for your sound effects. I don't know why this happens.

Gameplay: 8/10
This game is so, SO ridiculously addictive. I play it for like, 4 hours and I don't even know why. That's why I'm writing this now, because last night I played until 2:30 in the morning. I couldn't stop! It is really fun...but, like the music, it's so repetitive. You just want to keep going because around every turn there's something new happening - whether you find out a new piece of the story or a new puzzle opens up.. Whatever it is, you play because you want to know. And, since Chibi is so incredibly tiny: 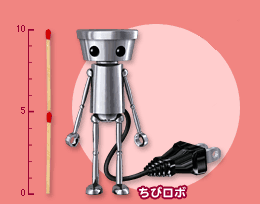 you are left with a landscape that, although it's only a single house to play in, is HUGE. I mean, the day is 30 minutes long and it probably takes 10 of those 30 minutes to get where you're going. I find this is semi-annoying and really leads to the repetitive problem in the game. For example, if you want to go up to the parents room to solve a puzzle you have to get all the way up the stairs (you get a teleporter which helps), get into their room, and then get to your puzzle which you usually have to do over and over to figure it out. (The camera angles aren't always working with you 100%.) I feel like I spend so much time doing the same thing over and over... and yet, I keep doing it. And the puzzles are getting harder. Seriously, up until about 9 hours into the game I was disappointed with how easy it was..now? I don't want to put the game down. I want to beat it. I want to become a Super-Chibi-Robo!! (The ultimate goal of your chibi, besides making the family happy.)

Overall: 8/10
It's a fun game, definitely a good way to pass the time. It's family friendly, as there is no real violence (you shoot some robot spiders, but that's all in good fun). There are just the 'adult themes' of divorce, etc. I would suggest this game for winter, when you don't know what else to do with yourself.

Buy/Rent?
You could easily rent this game. Like I said, it doesn't seem like it'll warrant a ton of playtime...but I could be wrong. And, also previously mentioned, when you play you tend to lose track of time and play for a long time...so if you rented you'd pry only have it out a couple weeks. This would be a good one if you subscribe to a Netflix type thing for games. But me? I'm a buyer. I want to know that I can pick it up again at any time.
Posted by Linz at 11:55 PM